2017 "Chanting On the Edge of the Volcano", Carter Burden Gallery, New York, NY


2010 “ Spirits in the Material World,“ A Gathering of the Tribes Gallery, New York, NY


2006 “  A Bird in Flight is an Omen, Tribute to Charlie Parker,” 5-month Outdoor Installation, Tribe Gallery,


2007  “ Annual Tribute to Charlie Parker,” A Gathering of the Tribes Gallery, New York


2007    “Art from Detritus – Recycling with Imagination,” Synagogue for the Arts  New York, NY


"The Nature of our Environment," The Times Square Lobby Gallery, New York, NY


“Works from a Suitcase," The Holfkabinet Gallery, Lenz, Austria


1985      "Spirit House," Art on the Beach,collaboration with David Hammons and Jerry Barr,


The Library of Congress, Washington, D.C.


Heresies: A Feminist Publication on Arts and Politics, "Woman on Men," '89


Film in cooperation with the New School “On the Cusp”

The images I compose, whether dyed, drawn, painted or printed explore the indivisible link between the human race, nature and our reciprocal evolution with all the life forms that share this planet.

Inspired by deities of ancient religions, myths, and folklores, especially the Bird Women and Goddesses of the pre-historic Fertility Cults and the never failing ability of nature to nurture us spiritually, I like to combine and juxtapose animal and human features to let the spirits, often times hidden from our eyes, emerge into existence. These have been and still are mostly conscious choices of focus, but childhood memories and the circumstances of life experience are the constantly growing and evolving influences of intuition, imagination and the subconscious.
I grew up in Brighton Beach in sight of the vast horizon of the Atlantic Ocean, the carnival atmosphere of Coney Island and surrounded by the supportive tribe of a huge Italian immigrant family. Enchanted by my mother's dancing and her ability to sew fantastic gowns, costumes, and clothes, my father's deco furniture designs, stage sets, and opera records, my grandparent’s practice of Italian voodoo, and my younger brother's talent for making a joke out of almost anything.
I always drew pictures, but it wasn't until Hunter College that I realized with great relief that I could become an artist. That was the sixties; Abstract Expressionism, Jazz, Dance, the Civil Rights Movement, and Women's Liberation were my deepest influences, but at the same time I longed for the Renaissance, Surrealism, Dada, figurative painting, and my own roots. So, I left for Italy, stayed for two years, studied at the Academy of Fine Arts in Florence and Bologna, saw wonderful, amazing art, architecture, and  design, fell in love with Fellini's films, the Piazza- Siesta rhythm, and gave birth to my first child.

And now, three children, four grandchildren and more then a few lifetimes later, I continue to make images, still and sometimes moving, and hope to continue to create, explore, play and discover wherever this ancient practice leads me or I choose to go. 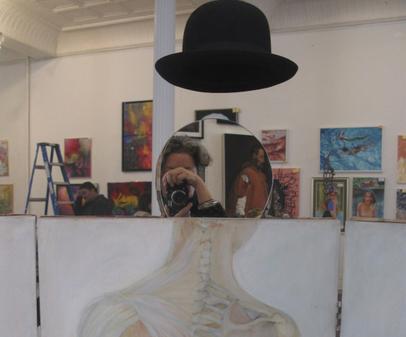